Are you familiar with Blue Cypress essential oil? Surprisingly, many of our members are not yet acquainted with this amazingly versatile oil. Let me introduce you!

Sometimes referred to as Blue Gold, Blue Cypress is a beautiful, cobalt blue and is the only naturally blue essential oil that comes from a tree. Other blue essential oils such as German Chamomile and Blue Tansy are from flowers. So distinctive and beloved is this tree’s aroma that it was chosen as the official fragrance of the Sydney 2000 Olympics.

Young Living’s Blue Cypress essential oil is steam distilled from the leaves and wood of the rare Northern Cypress Pine, native only to Australia’s Northern Territory. The scientific name of Blue Cypress, Callitris intratropica, is derived from the Greek calli (beautiful) and treis (three), which references the tree’s triangular leaves that are arranged in spirals of three.

Blue Cypress has been used for thousands of years by Australian aboriginal people in a variety of household and personal applications. Here are a few ways you can use Blue Cypress: 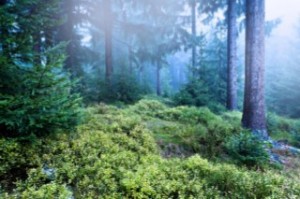 2. Moisturize skin. Blue Cypress has excellent beneficial properties for the skin. Use Blue Cypress alone or blend it with Sacred Frankincense, Lavender, and Royal Hawaiian™ Sandalwood essential oils and apply topically to hydrate the skin after time outside.

3. Soothe skin while shaving. Add a drop or two of Blue Cypress to shaving cream, soap, or aftershave to help prevent razor burn.

4. Use in household cleaning. Add Blue Cypress to Thieves® Household Cleaner for extra cleaning power or include it in a custom blend of Lemon and Clove essential oils mixed in water to create your own all-purpose cleaner for kitchens, bathrooms, desktops, and other surfaces.

This blog was written by Young Living International and Portfolio Brand Manager Heidi Jeanfreau, and reprinted with permission from the Young Living website.

Growing up in New Delhi, India, Aruna Bakhru experienced what we in the West would call “alternative medicine” as a daily way of life. “It was all around us, it’s a part of your life. You don’t have to go out and seek it,” says Aruna. “Yoga, meditation–all the practitioners were there. If you would be better treated with a homeopath, they’d take you there, or an Ayruvedic doctor, they would take you there. It was just all around us.”

Nevertheless, says Aruna, Western Medicine is the main system of medicine, with its strict scientific approach, and it caught the imagination of an aspiring young woman. Despite the centuries-long medical traditions of India, without Western science’s double-blind studies, these modalities are unproven and condescended to as simply folk medicine. “But it was good, because now I have the scientific training and the background,” says Aruna. “It gave me perspective.”

Dr. Bakhru completed her Bachelor’s degree in Medicine and Surgery from Lady Hardinge Medical College, University of Delhi, India, and finished her Residency from Prince George’s Hospital Center, Maryland, U.S.A. in 1988, before beginning her private practice in Poughkeepsie, New York.

Her first return to alternative medicine happened in 1997 at a medical conference. Representatives from BioMeridian cajoled her into purchasing their “Meridian Stress Assessment Device.” “I was very much a square internal medicine person,” says Aruna, “But they just pursued me so heartily, I just gave in and bought it.”

During the sales pitch, Dr. Bakhru had a very personal experience with the device. “While they were testing me on the machine, the homeopathic for ‘tetanus antitoxin’ came up. I just burst into tears. I’m not normally that kind of person, but it just brought back a memory I didn’t think I would remember.”

In her first year internship at the University, she was assigned as the In Charge at the tetanus ward at a hospital for a month–a requirement for all green graduates. Most of the patients were babies. “It just broke my heart,” says Aruna. “The nurses were all jaded, sitting around in the lounge drinking tea, while all these babies were dying. At the end of it, I was sick.”

So, when the device registered the tetanus antitoxin as a remedy for her, “It touched me deeply, and I cried,” says Aruna. She brought the device into her practice and began experimenting with it. “In the beginning I just used it as a hobby, but then I started seeing these remarkable effects with patients getting better.”

The device is computerized and can be programmed to indicate any remedy the operator chooses, so Dr. Bakhru added several thousand from widely divergent modalities, including the subtle energy formulas from Dr. Yury Kronn we feature at Subtle Energy Solutions. She plans on even including yoga postures and mantras as options for the device.

As Dr. Bakhru continued her exploration into alternative medicine’s vast frontiers, she received training in Emotional Stress Integration. “It’s where you go and look for a thought pattern that is coloring somebody’s life,” says Dr. Bakhru. “You then replace it with a healing pattern. With that you just seem to find the one issue that is coloring that whole person’s life–it’s like their blind spot. They cannot see it, yet it is affecting everything they do. It’s affecting their health.”

During her training for ESI with her teacher, Dr. Bakhru was able to find stress points instinctively, prompting her Chinese doctor instructor to ask if she was a Chinese medicine doctor. “And it’s so odd, because my whole life I’d been using my left brain,” she says. “I can see someone I don’t know at all–I’m not their doctor and know nothing about them–and I can tell them things…using the device, of course.” The machine providing the valuable intuitive validation, not only for the operator, but for the patient as well. “They get a print out,” she says, “So it’s not just me telling them.”

When asked what the most common malady she has seen from her patients in her practice, it is tiredness. A common source of this tests out to be toxicity, which has become a major campaign of Dr. Bakhru. In her article, “The Poisoning of Humanity,” on her website, she says, “Mercury is the most toxic heavy metal on the planet. Even in the so called bound form in amalgam, it vaporizes, it leaches, it travels to the brain, the heart, the thyroid, the liver, the kidneys, the connective tissue. It is curious that with all the strides that were made, in the field of Medicine and Dentistry they continued to use this material. Amalgam is treated as a toxic waste after it is removed from the fillings. It is treated as a hazardous material by the dentist and his staff. Yet it is apparently OK to put it into people’s mouths.”

Beyond Mercury, modern technological society has a host of other sources for physical toxicity, such as MSG, the benzoates (when heated and combined with ascorbic acid creates benzene, the most potent of carcinogens), hydrogenated oils, dairy additives, and even electromagnetic pollution that is everywhere.

In her article, “Living in a Toxic World – Children’s Nutrition,” Dr. Bakhru cites the work of Dr. Mark Hyman, author of Ultrametabolism: “”We live in a culture that makes it nearly impossible to make healthy food choices. A number of food industry and political factors keep us sick and fat. In supermarkets 25% of the square footage is devoted to selling sugar.” She lists his lifestyle suggestions for making supermarket food choices:

“There is not an ocean you can go to that isn’t polluted with dioxins. The air we breathe, the water we drink, are all affected,” says Dr. Bakhru. “First we polluted our world with chemicals, now we are polluting it with electromagnetics, which I think is a much worse pollution.” She offers several products to address this type of pollution on her website.

“You know, your body is not separate from Earth. What you do to the earth you do to all of our bodies,” says Dr. Bakhru. “It’s holographic. A small change somewhere affects everybody. We are all children of the earth and we need to come together to care for our mother. We are on this little island in space together, so we’ve got to help each other, look out for each other, and be kind to each other.”